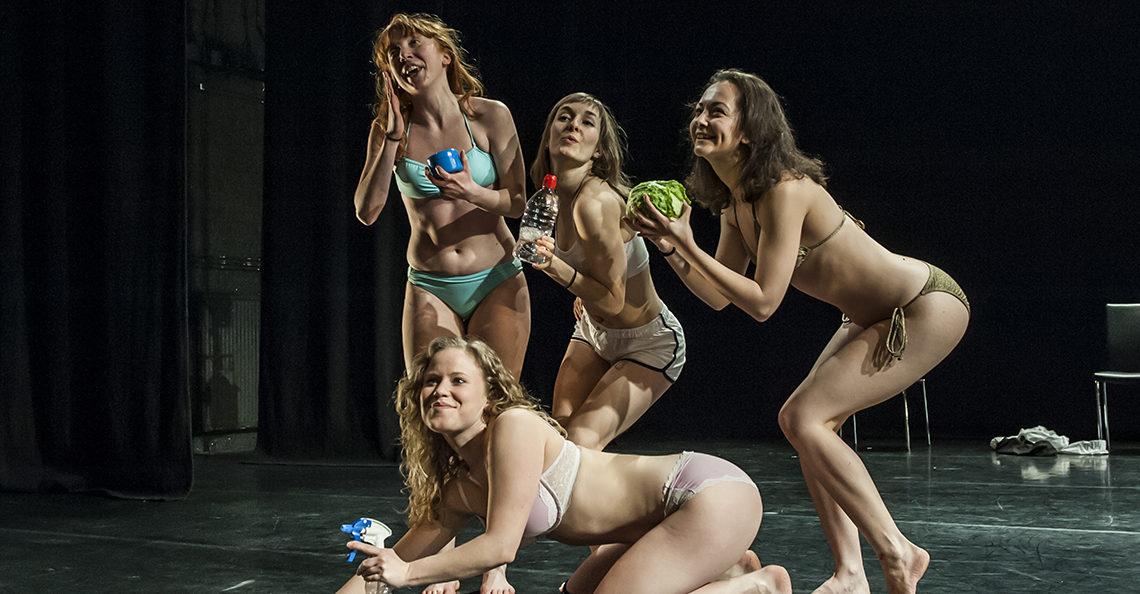 Originally produced for NSCD’s Northern Connections programme, This really is too much is an outlandish, bold and genre-busting performance. It delves into a world of farcical stereotypes and preposterous power struggles. With irreverent physicality, four characters wrestle with restriction and gender identity as they try to work out which box they fit into.

Just as this year’s call-out for emerging dance artists in the North gets underway, it is great to see Gracefool building on their own Northern Connections success last year.  Since that point,  Gracefool’s work, ethos and fervent discipline has taken them from strength to strength.

Raucous and thought provoking in equal measure, This really is too much reveals the downright absurd realities of what it means to be a 3-dimensional, high definition, water-drinking, salad-eating, moisturising woman in modern society.

In This really is too much, four women attempt political speeches, job interviews and talent contests, exposing life as one continuous performance. They fight themselves, each other and society’s expectations to be individual, political, beautiful, popular and in control, striving to be more than just a stereotype career woman, beauty queen, authoritarian or housewife.

The four artists, also the masterminds behind ProDanceLeeds, a project funded by the Arts Council England, providing affordable classes for professional dancers in and around Leeds, are making their mark for presenting feminist comedy dance at its very best.

Following Resolution! 2016 performances, Sarah Crompton, freelance writer and former Telegraph Arts Editor in Chief and Dance Critic, said: “This really is too much is sharply funny about the way in which women are pigeon-holed into different roles…everything is performed with striking discipline and skill.”

Gracefool Collective’s Rebecca Holmberg, said: “Following the response to This really is too much at Resolution, we can’t wait to return to London and perform the work in the intimate setting of Blue Elephant Theatre. This opportunity would not have been possible without the generous support of Arts Council England, Spin Arts, Northern School of Contemporary Dance, Yorkshire Dance, The Civic Barnsley, Activate Performing Arts and Charlotte Vincent and Gillie Kleiman for their invaluable mentoring.”

For This really is too much: costume advice is by Kelli Des Jarlais; sound by Florence Glen; lighting design by Luke Haywood; original writing by Gracefool Collective with extracts from Hidden: A Gender (in Gender Outlaw) by Kate Bornstein.

Rod Dixon, Artistic Director of Red Ladder Theatre, said: “Gracefool are a company to watch”. Red Ladder will present an abridged version of This really is too much as part of a double-bill in 2017.