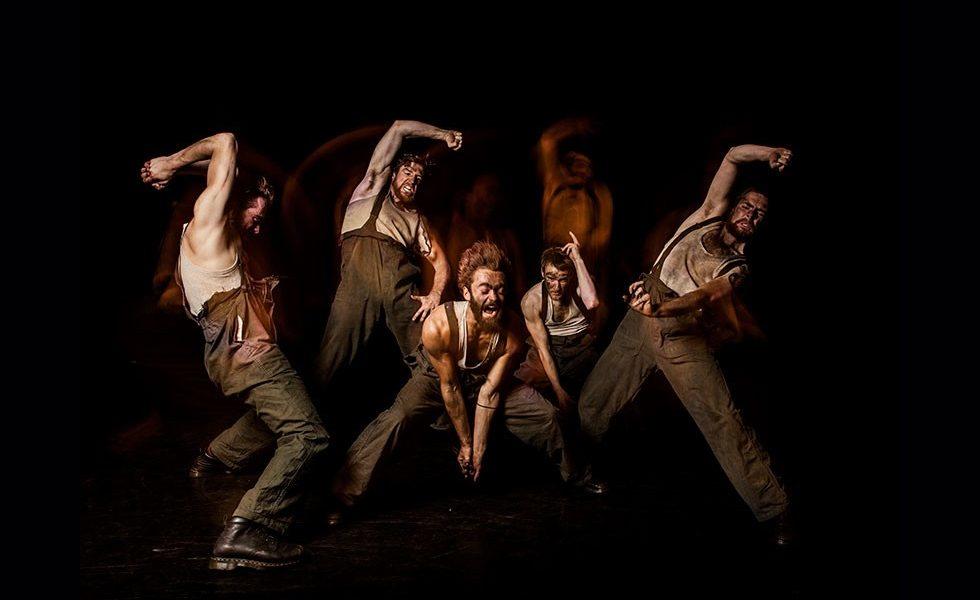 COAL has been hailed by critics as “urgent and heroic” and “emotional dynamite.” Created to mark the 30th anniversary of the Miner’s Strike by Barnsley, choreographer, director and NSCD alumnus dancer Gary Clarke.

Gary is currently regarded as one of the UK’s leading independent dance artists. Since graduating from the Northern School of Contemporary Dance (2001), Gary has worked with some of the worlds most eminent and world leading dance companies and choreographers including Lea Anderson’s The Cholmondeleys & The Featherstonehaughs, Matthew Bourne’s New Adventures, Lloyd Newson’s DV8 Physical Theatre, Liv Lorent’s balletLORENT, Candoco Dance Company / Jerome Bel, Retina Dance Company, Nigel Charnock + Company, Bock & Vincenzi, Phoenix Dance Theatre and Sadler’s Wells Productions. Gary has also worked as a Movement Specialist on a number of large scale Hollywood feature films including World War Z, JK Rowlings Fantastic Beasts and Where to Find Them and The Mummy.

Now COAL has picked up its first major award in a ceremony at London’s historic Guildhall.

The UK Theatre Awards are the only nationwide awards to honour and celebrate outstanding achievements in regional theatre throughout England, Scotland, Wales and Northern Ireland.

“To actually be on stage receiving a UK Theatre Award in the face of such incredible competition exceeds any expectations I may have had when I first began to work on COAL in Barnsley in 2009,” said Gary.

“The amazing dancers of the company produce the work time after time again with heart and soul and integrity.

Thanks to all of our Pit Women from around the country who join the professional cast on stage. I respect them more than they will ever know, and massive thanks to the brass bands who create our evocative score.

Thanks too to the many miners and their families who continue to fight and survive an industry now apart forgotten. COAL is a show to add to a legacy and a mark of respect to the working classes.”

COAL, which was given a four star review by The Times, was launched in the Spring 2016 and is now on the autumn leg of a tour that takes it to Glasgow, Huddersfield, Canterbury, Durham, Caerphilly and Manchester.

The show will then continue to tour nationally and internationally throughout 2017.

The show was created and developed in South Yorkshire by Gary who still lives in the former pit community of Grimethorpe, where he grew up during the strike of 1984/85.

It is based on years of personal research by Gary, including extensive interviews with Anne Scargill – former wife of NUM president Arthur Scargill – and Betty Cook, the founders of Women Against Pit Closures.

The production team, made up of highly experienced independent specialists, headed by Gary’s long-term collaborator and producer Annabel Dunbar, is mainly based in Sheffield, and the musical director is acclaimed Yorkshire based Steven Roberts.

COAL is co-commissioned by DanceXchange, Cast Doncaster, The Place, Dance City, Dance4 with Nottingham Playhouse, The Civic Barnsley and Yorkshire Dance with additional funds from The National Lottery through Arts Council England, Individual Giving through kick-starter with support from The Northern School of Contemporary Dance and The NUM.

There’s a thunderous soundscape by Noise Artist Daniel Thomas as well as a shocking short film by Siobhan McKeown capturing devastating scenes of the strike in an immersive, accessible and affecting audience experience.

Dramaturgy is by Lou Cope, with costumes and set by nationally acclaimed designer Ryan Dawson Laight and lighting by Charles Webber, whose work on COAL has been nominated for a major design award.

The unforgettable voice the Prime Minister at the heart of the dispute is provided by Steve Nallon, still best known for his many performances as Margaret Thatcher in long-running cult TV hit Spitting Image.