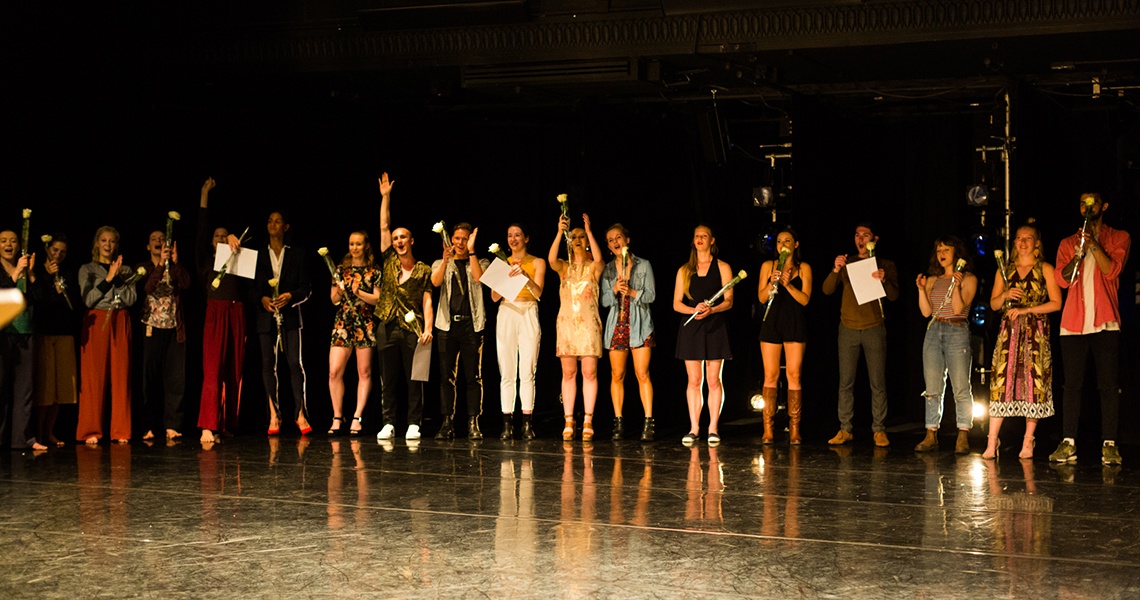 NSCD graduates this year have gone on to win numerous contracts with professional companies internationally, including tanzmainz, Matthew Bourne's New Adventures in Motion Pictures, Russell Maliphant Company, Rosie Kay Dance Company, Phoenix Dance Theatre and Tavaziva Dance. More graduates than ever have secured apprenticeships and places on postgraduate programmes in connection with the School and many are pursuing their own independent creative projects. We are delighted that such a high number have gone on to enter the profession, or further study, and wish all our graduates a healthy start to rewarding and fulfilling careers in the arts.

The 2018 graduating cohort comprised; 28 Access; 44 BA (Hons); 7 PG Dip and 22 Masters students. Of the 28 students who completed the Access course, 24 have gone on to study at NSCD or other conservatoires.

A record number of our students who graduated from the BA (Hons) in 2018 have gained places with professional companies as apprentice dancers on the school's Postgraduate Apprenticeship Scheme (PAS) in the UK and abroad. In August Nora Monsecour moved to Germany to join tanzmainz, and has already been offered a contract to continue working with the company as a professional dancer once her apprenticeship finishes.

Roisin Whelan joins Black Box Dance Company as an apprentice dancer and has secured a full-time contract with Matthew Bourne’s New Adventures in Motion Pictures while Moronfoluwa Odimayo has a contract with Russell Maliphant Company lined up in addition to projects with Gavin Coward and TRIBE company.

Jack Hilton took on a full time role with BalletBoyz as a company member following a year of apprenticing alongside his final year of undergraduate study, and has set up a new company ‘FIN’ with fellow graduate Callum Osbourne.

Imogen Reeve, Marie Kohl and Eva Leemans have also set up their own company – Excessive Human Collective and have already been successful in securing funding for future work.

VERVE 18 dancers have gone on to secure work with a wide range of companies, as well as teaching and pursuing their own choreographic interests. Alethia Antonia has secured current and future contracts with Russell Maliphant Company and NSCD alumnus Jamaal Burkmar, in addition to work with Ion Tribe/Luke Jessop and NSCD alumna Heather Walrond Company. Sharol Mackenzie has current and future contracts with Matthew Bourne’s New Adventures, Richard Chappel Dance and Mark Bruce Company, and is developing a solo work of her own, while Michele Scappa joins Titoyaya Dansa in Spain, led by Artistic Director Gustavo Ramirez Sansano. Maria Elena Bolelli will move to Denmark in January to join Black Box Dance Company after being offered contracts with Iceland Dance Company and reaching the final 3 shortlisted to join Rambert Dance Company. Katy Hewison is working on an ACE funded project, Rural Steps, setting up two new youth companies in North Yorkshire as well as working with Vanessa Grasse, and Anders Engebretsen is working for pre-vocational school Spin-Off in Norway as well as undertaking freelance performance work. This year Ruby Portus showcased new work at Sadler’s Wells as part of Sadler’s Wells Young Associates, a new initiative launched to support talented young choreographers at the very outset of their careers for a period of two years. Daisy Howell is working with her own company- Brink on various projects including a mixed-mode collaboration with DJs and artists in Manchester commissioned by the Lowry.

MA Dance & Creative Enterprise graduates are also enjoying success-  João Maio recently completed a UK tour of Rosie Kay's M.K Ultra, and started work as a creative producer for Open Source Arts in Leeds, Sisi Li is continuing her postgraduate studies in Choreography at Trinity Laban, Conservatoire for Music & Dance, and Misato Shimizu is working on a new site-specific, multidisciplinary art project in Tokyo. Misato has also been selected as a featured choreographer for Let's Dance International Frontiers 2019 in Leicester, and will perform a solo work in May.

Have an update for us?

Get in touch at alumni@nscd.ac.uk- we'd love to hear what you're up to!