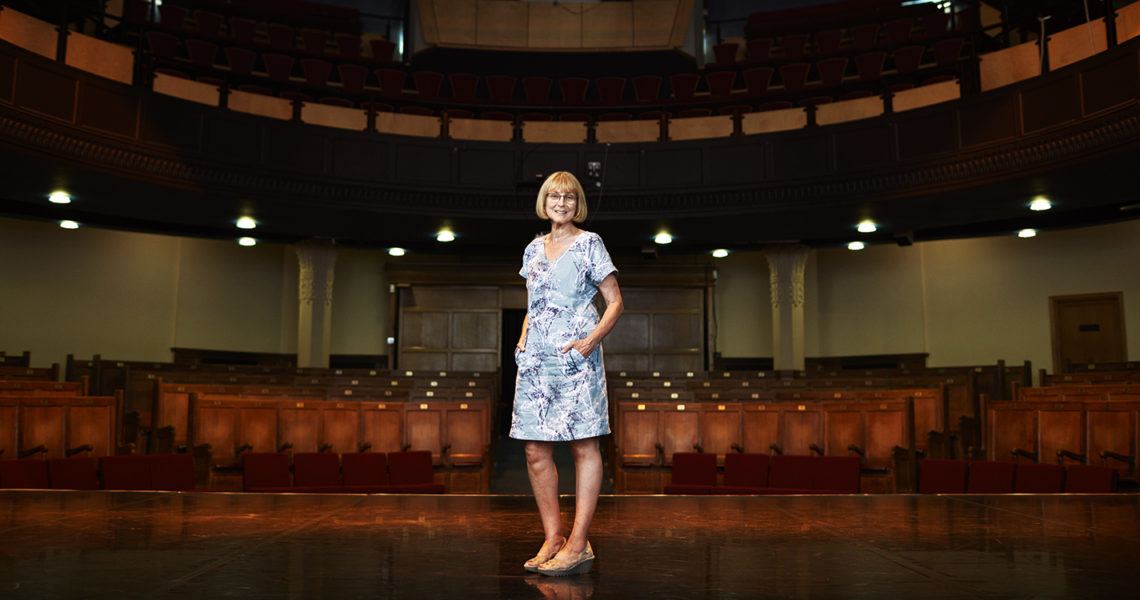 In recognition of her outstanding contribution and services to Northern School of Contemporary Dance, on 1st July we present former Principal and Artistic Director Janet Smith MBE with the award of Honorary President.

Born in 1951 and brought up in Leeds, Janet studied at Dartington College of Arts, Devon, specialising in dance, and was awarded a Diploma in Dance and Drama. Following a teacher training year at Rolle College, Exmouth, she continued her dance training in New York at the studios of modern dance makers including Merce Cunningham, Eric Hawkins and Alvin Ailey.

She began her professional life as a solo dance maker and performer and a freelance teacher, going on to form Janet Smith and Dancers in 1976.  The company, supported by the Arts Council, created and commissioned contemporary dance works and toured nationally and internationally for over a decade, reaching a wide audience. Janet was also committed to helping others experience dance through workshops and residencies delivered by the performers and the company was known for widening access and encouraging creativity, especially for children and young people.

In the early 80s Janet also relished the opportunity to perform with London Contemporary Dance Theatre over two seasons, under the direction of Bob Cohan, and with Rosemary Butcher, both artists whose work she greatly admired.

Janet has choreographed and taught internationally, working with companies including Freiburg Tanzteater, (Germany), Batsheva Dance Company (Israel), Cisne Negra (Brazil) and The Playhouse Company (South Africa).  She also came to work more closely with the conservatoire and Higher Education dance sectors, directing the postgraduate performance company at the London School of Contemporary Dance and working as a Lecturer in Dance at Bretton Hall College, West Yorkshire.

In 1997 Janet became Artistic Director of Scottish Dance Theatre, Scotland’s major contemporary dance company. The company grew in size and stature under her leadership, won awards for its repertoire, increased its funding base and secured the funds to extend its facilities. It also developed international touring and recognition and was recognised nationally for its leadership in Dance and Disability.

Janet has also choreographed and directed movement for theatre, where credits include A Broken Heart and Twelfth Night for the Royal Shakespeare Company directed by Michael Boyd and Peer Gynt for the National Theatre of Scotland and Dundee Rep Theatre directed by Dominic Hill.

In 2012 Janet returned to Leeds to take up the role of Principal and Artistic Director of Northern School of Contemporary Dance and led the School until her retirement in May 2020. Under her leadership, National Portfolio Organisation funding status was successfully acquired from the Arts Council of England, which recognised the institution’s strong contribution to the development of dance in Leeds and the North.

Janet has served on the Boards of London Contemporary Dance School and One Dance UK. She is an Honorary Fellow of Dartington College of Arts and has an Honorary Doctorate of Arts from The University of Kent. She is a recipient of the Jane Attenborough Dance UK Industry Award which honours an individual working in dance who has made an outstanding contribution to the art form and a One Dance UK Lifetime Achievement Award for her contribution to Dance Education.