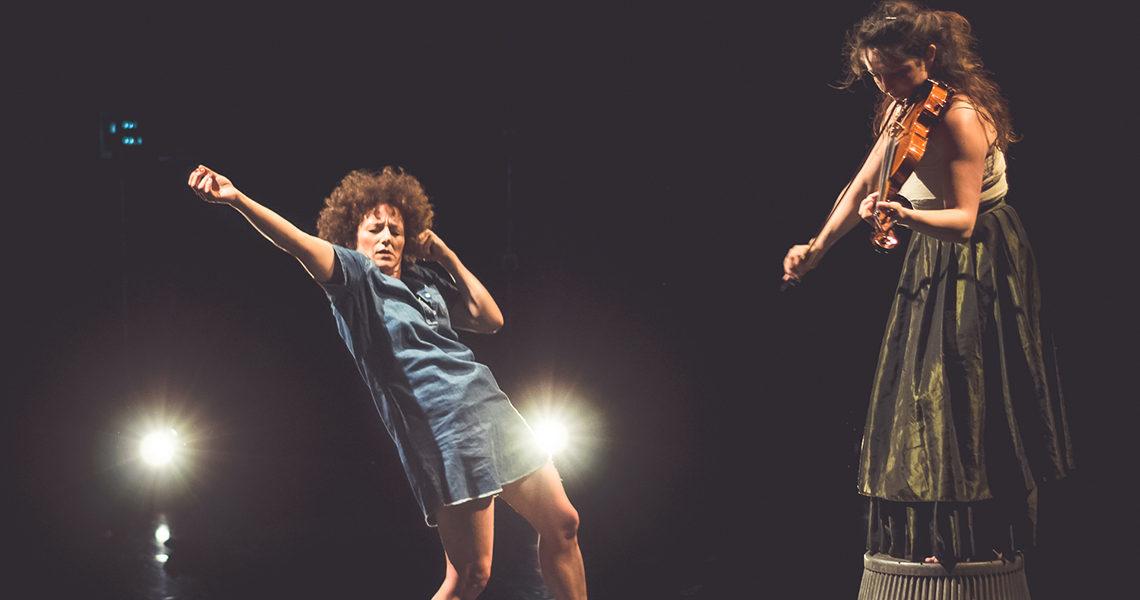 On Thursday 27th April, the Riley Theatre presented a triple bill of dance works by three choreographers who had been chosen to undertake a three week residency at NSCD as part of the Northern Connections programme. Northern Connections seeks to provide space and support for artistic development for emerging choreographers from the North, and this first showing of work certainly proved that there is a wealth of exciting, emerging creative talent in dance beyond London!

The evening opened with ‘Depart’ by Daniel Phung Dance. The work explores grief and loss, and was performed with strength, prowess and grace by Phung and his company of three dancers (Kayleigh Price, Samuel Baxter and James Olivo). Opening with a couple slow dancing while Olivo plays a piano under a single bare light bulb, the audience already feels as if they have been drawn into a personal and intimate scene, or perhaps a memory. As the piece develops, the dancers’ movement becomes explosively physical, demonstrating their strength and capability while retaining an element of playfulness. This sense of play was particularly evident in a duet between Price and Baxter, which was both aesthetically and emotionally engaging, a quality which could be attributed to most of the choreography. Each dancer appeared to bring their own understanding of loss to the piece, and the relationships between them was perhaps the most interesting element of the work. Their shifting roles and interactions with each other provided a centre point for the piece, which ultimately succeeds in conveying the feeling of losing someone which so often words cannot communicate.

The second piece of the evening was ‘Good Blood’ by Keira Martin, a duet which she devised and performed with her sister, Sioda Martin. In the work, the sisters revisit memories of their childhood spent growing up in an Irish family in South Yorkshire, as well as the experience of growing from girls to women. This highly entertaining and touching piece used an effective blend of text and dance to create a theatrical experience which any audience member with a sibling could almost certainly relate to! The performers reenacted snippets of memories from their youth with humour and honesty, recalling “camping”, “cottages in Ireland” and “smoky pubs”. These moments of reflection were interspersed with movement and dance which drew largely on Martin and her sister’s Irish heritage, blending a physical contemporary movement vocabulary with traditional Irish dance. Later in the piece, we see a transition from childhood to adulthood as Sioda trades her childlike yellow top and dungarees for a green skirt and bandage which Keira wraps around her body- a comment on how women’s bodies are viewed as they change with childbirth, age and life. What I found striking about this piece was how vividly both Keira and Sioda Martin’s personalities were portrayed on stage, as well as the relationship that they shared and how they interacted with each other. As the sisters sang ‘The Parting Glass’ hand in hand, I was extremely moved by the deep connection which they felt to their roots and how this was tied to the incomparable bond which two sisters share.

The final work to be presented was Akeim Toussaint Buck’s ‘Windows of Displacement’. In a powerful thirty minute piece, Toussaint Buck provides the audience with a multidisciplinary experience exploring themes of immigration and refuge, from his own experience of struggling to gain British citizenship as a Jamaican immigrant to the plight of today’s asylum seekers. Similar to Martin, Toussaint Buck uses his cultural roots to create a movement language which celebrates his Jamaican heritage, while employing spoken text to communicate his story to the audience. Toussaint Buck’s strength and powerful physicality serve to add even more weight to the tale of the obstacles which he came up against when moving to Britain, and how he and many immigrants and refugees have been made to feel belittled by this system. ‘Windows of Displacement’ goes beyond a conventional theatre performance, as Toussaint Buck immerses his audience in his work, teaching them a song which they later sing with him in the piece. For me, being involved in this way created an immense sense of union and togetherness between the artist and the viewers. Toussaint Buck brings a sense of spirituality into his work which is both uplifting and thought provoking, and seems to do justice to the serious issue which he seeks to explore.

What struck me as a standout connective link between all three works was the manner in which each dealt with various aspects of life and the human experience in a uniquely personal way. Walking away from the Riley Theatre that evening, I felt as though each work had provided the audience with a window to see into some part of each of the choreographer’s lives, and for that I feel privileged. After having watched the first of two showings of work by Northern Connections, I am excited to see what the future holds for Northern dance and choreography.